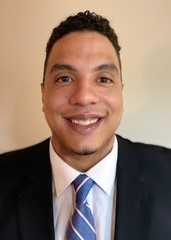 Isaac McMahan joined Veterans Education Success in July 2020. Isaac brings experience in civil rights law and promoting access and success of law students of color. Most recently, Isaac served as Diversity Analyst at AccessLex Institute, where he worked to improve diversity in legal education and acted as a resource for prospective minority law students and partnering schools. He played a key role in ensuring the successful launch of the LexScholars Program, a law school diversity pipeline program initiative targeting prospective law students from underrepresented racial, ethnic, and socio-economic backgrounds.

While pursuing his law degree, Isaac worked with the NAACP General Counsel Office in Baltimore, Maryland. As a Fellow, Isaac evaluated and examined citizen complaints for civil rights violations and worked on variety of legal issues ranging from employment discrimination to prosecutorial reform.

Isaac received his law degree from the University of Maine School of Law and his Masters in Law (LL.M.) from American University with certificates in both International Human Rights and International Trade and Investment law. In law school, Isaac served as the Editor-In-Chief of the Ocean and Coastal Law Journal and the President of the Black Law Students Association. Isaac was awarded the Edward S. Godfrey Leadership award for making the most significant contribution to a student-edited law journal during his years at the law school, as well as the Faculty Award of Community Service for doing significant work in bringing together the law school community and the community at large.

Isaac obtained his undergraduate degree from Carson-Newman University, where he played on the football team and served as a Bonner Scholar. Isaac comes from a family with strong military ties. His father and grandfather served in the Navy, and his brother served in the Army.