Impact of Disability on First-Time Student Veterans’ Persistence and Attainment

Veterans more closely resemble older students, rather than individuals who enroll in college right after high school. As a result, when comparing veteran and non-veteran students, we report on non-veteran independent students who are not reliant on their parents for financial support.

According to Brookings, however, when participation in postsecondary education is factored in, both male and female veterans’ overall engagement (both workforce and/or school) is higher than among nonveterans: for ages 25-40 among males and even more so among females, from ages 25-50. Furthermore, comparing veterans and nonveterans who report a disability, veterans participate in the labor force at higher rates than nonveterans.

Veterans who qualify for GI Bill benefits may also be eligible for services provided through the Vocational Rehabilitation and Employment Program (VR&E). This program provides comprehensive services and assistance necessary to enable veterans with service-connected disabilities and an employment handicap to obtain stable and suitable employment. Qualified veterans may apply for either vocational rehabilitation and employment benefits or for education/career counseling.

According to Education Department data, 33% of first-time undergraduate veterans who began their studies in 2011-12 reported having a disability. Among student veterans with a disability, just over half report having either attention deficit disorder (26%) or mental, emotional, psychiatric conditions, or depression (29%), followed by hearing impairment (14%), brain injury (3%), orthopedic or mobility impairment (3%) and “other” (23%).

The percentage of first-time undergraduate veterans reporting a disability varies by sector, ranging from 24% of veterans enrolled at for-profit institutions to 41% of those at public 4-year colleges and universities (figure 1A).

Student veterans with a disability are more likely to  enroll at public institutions than are first-time non-disabled student veterans (67% vs. 55%, respectively), possibly due to support services and accommodations available to such veterans at those institutions (figure 1B).

Additional characteristics of first-time undergraduate student veterans with a disability include: 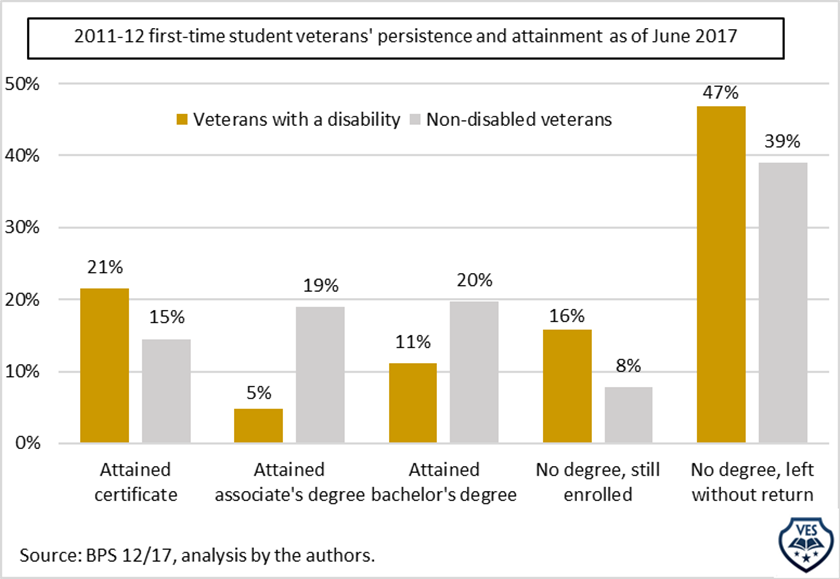 Self-Reported Factors Affecting the Enrollment of Veterans with a Disability

As of 2017, the postsecondary completion rate for veterans with a disability was lower than that of their non-disabled veteran counterparts for those pursuing associate and bachelor’s degrees. Among first-time student veterans with a disability who enrolled in 2011-12, 37% had completed at least one degree by 2017 and 63% were either still enrolled or had left (fig 2A).

Regarding persistence, almost half of veterans with a disability who began their degree in 2011-12 left postsecondary education by 2017. Based on this analysis, the riskiest years are the first and fourth (figure 2B). Veterans with a disability were more likely to have left postsecondary education than other veterans (47% vs. 39%) and were twice as likely to still be enrolled (16% vs. 8%).

Outcomes for Veterans vs. Non-Veterans with a Disability 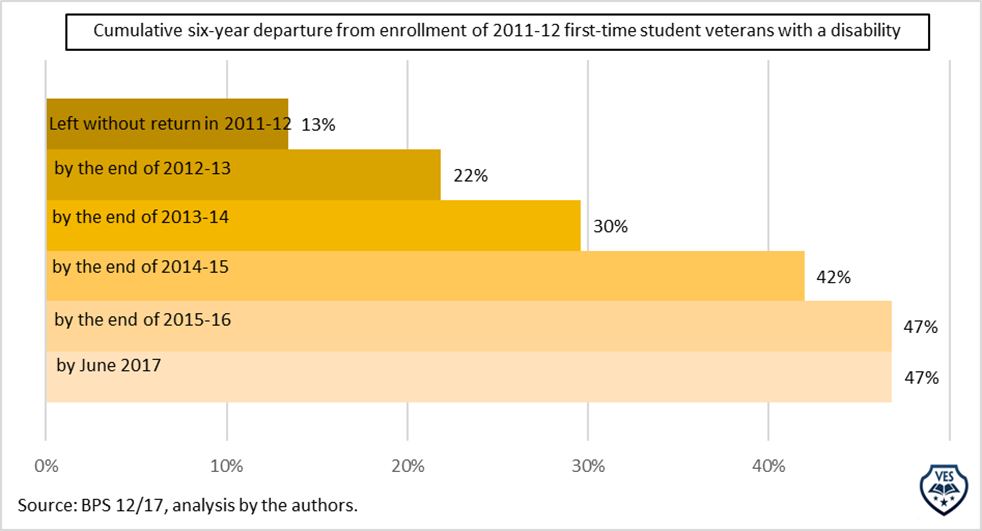