RIVERSIDE – U.S. Representative Mark Takano (D-CA) met today with a group of California military veterans who were targeted for fraud when they utilized their GI Bill educational benefits. From excessive fees to withholding transcripts to signing students up for loans they had not authorized, California Veterans have faced numerous unethical practices by schools eager to cash in on their federal benefits.

Brandon Nielson served as an artillery cannon crewmember in the U.S. Army from 2009 until 2012, during which time he deployed twice to Iraq. After receiving his Honorable discharge, Brandon worked for a short time before enrolling at ITT Technical Institute in Corona, CA. He used his Post 9/11 GI Bill educational benefits to first complete his associate’s degree in Network Systems Administration, and then another associate’s degree in Software Development before starting his bachelor’s program. Despite assurances from the campus dean that ITT Tech would keep its accreditation and continue to issue degrees for at least another 18 months, Brandon and his fellow students were notified the following week that the school was closing. He was given less than a month notice. Since then, Brandon has been unable to transfer his ITT Tech degrees or find gainful employment. He still owes nearly $10,000 in federal student loan debt. With the passage of the Harry W. Colmery Veterans Educational Assistance Act of 2017, Brandon stands to receive a full restoration of his GI Bill educational benefits, which were unfairly squandered at no fault of his own.

Abraham Perez enlisted in the U.S. Marine Corps in 2000, and served four years as a bulk fuel specialist before his Honorable discharge in 2004. He deployed to Iraq in 2003, where his unit played a critical role in support of combat operations there. Shortly after his discharge, Abraham used a combination of his Montgomery GI Bill and federal student loans to attend ITT Technical Institute in San Diego. The year after gaining his hard-earned U.S. citizenship, in 2007 he graduated with an associate’s degree in computer electronics and engineering technology. When he tried to retrieve his degree, however, ITT Tech refused until he paid $2,000. Abraham disagreed but had little choice and paid the money, only to then learn that his ITT Tech degree was not recognized by other institutions of higher education. To improve his employability, Abraham continued his formal training, and obtained multiple computing and engineering certifications. Even so, he has been unable to find quality employment to support his wife and three children. Abraham has over $30,000 in student loan debt from ITT Tech, and has been chronically underemployed for the past 10 years.

Robert Leach enlisted in the U.S. Army in 1989, and served as a military police officer for 10 years until his Honorable discharge in 2000. He then used his Montgomery GI Bill to attend the University of Phoenix online, but was told he could not enroll at that time without taking out federal student loans.

Robert listened to his recruiters and took loan money, but was still unable to afford the high tuition and eventually had to withdraw. For the next five years, he worked various jobs as a security guard, private investigator, and insurance fraud detective, before returning to Phoenix in 2005 to continue his studies in Information Technology (IT) management. Before he could complete his bachelor’s degree, however, Robert was again forced to withdraw due to Phoenix’s high tuition costs. Despite completing much of his program and using all of his GI Bill educational benefits, Robert never received an associate’s or bachelor’s degree from Phoenix. He currently owes over $3,000 in student loan debt, and has never been employed in the IT industry.

Giovanni Davis served for 8 years in the U.S. Army reserves, including over 2 years Active Duty status in which he deployed to Iraq. He also served for a year as an honor guardsmen rendering military honors to deceased veterans. After his Honorable discharge, in 2011 Giovanni decided to cultivate his passion for drawing and the arts, and enrolled at the Art Institute of the Inland Empire because the school was promoting its “Yellow Ribbon” program. This program, Giovanni was told, would cover all costs that his Post 9/11 GI Bill would not cover. So, like many of his military peers, he began and finished his first semester without issue. His completed his second semester also without problems. At the beginning of his third semester, though, the school surprised him with a $3,500 bill it claimed he owed from his second semester. Caught completely off guard and unable to pay, Giovanni was forced to withdraw and the Art Institute has since denied him access to his transcript. Since then Giovanni has worked as a grounds keeper, while operating his own nonprofit organization that seeks to protect persecuted Christians around the world.

Victor Savoy served in the U.S. Marine Corps as an aviation mechanic from 2008 to 2013. His enlistment included a 2011 deployment to Japan in support of the 31st Marine Expeditionary Unit (MEU), which provided disaster relief to Japanese citizens following a major earthquake and tsunami. Victor earned one of several Certificates of Commendation for his role in taking charge of a mission aboard ship that fixed Cobra and Huey helicopters faster that normally performed. Just days after his Honorable discharge, in March 2013 Victor enrolled at ITT Technical Institute in San Bernardino, California. The following month, he began taking courses that were required for a degree in Computer Electronics Engineering Technology (CEET). Victor remained continuously enrolled for the next several years, but in late 2016 his campus Dean made a surprise announcement that the school would keep its accreditation and continue to issue degrees. Less than a week after his Dean’s assurances, however, Victor learned of ITT’s closure. He was only two courses shy of completing his bachelor’s degree. To compound matters, a school official fraudulently certified a loan request in Victor’s name, which thankfully has since been discharged by the Education Department. With the passage of the Harry W. Colmery Veterans Educational Assistance Act of 2017, Victor stands to receive a full restoration of his GI Bill educational benefits, which were unfairly squandered at no fault of his own.

“We are grateful to Congressman Mark Takano for his leadership and for meeting today with these defrauded veterans to offer his assistance,” said Tyson Manker, Veterans Advocate at Veterans Education Success, which provides free assistance to veterans who were deceived or defrauded by a college. “Too many colleges see veterans as nothing more than dollar signs in uniform. America’s heroes should be treated with honor and respect when they become college students, not targets for consumer fraud.”

“America’s veterans deserve so much better than to be misled and defrauded by for-profit colleges when they return home,” said Rep. Takano. “Restoring GI Bill benefits to veterans left stranded by an abrupt school closure is simply the right thing to do, and I’m proud that Congress has finally provided these veterans a second chance at the future they deserve. I hope this is just the beginning of our effort to ensure student veterans are receiving the education they have earned through their service.”

Lawmakers in Congress have taken action to restore benefits to some student veterans who, through no fault of their own, were targeted with fraudulent and deceptive practices by unethical colleges and schools. For example, H.R. 3218 the ‘Harry W. Colmery Veterans Educational Assistance Act of 2017’ was recently signed into law, and will provide relief to veterans who attended now-defunct colleges.

Representative Takano has been a leader in the fight to protect student veterans, and is an original co- sponsor of this legislation, the full text of which you can read here. 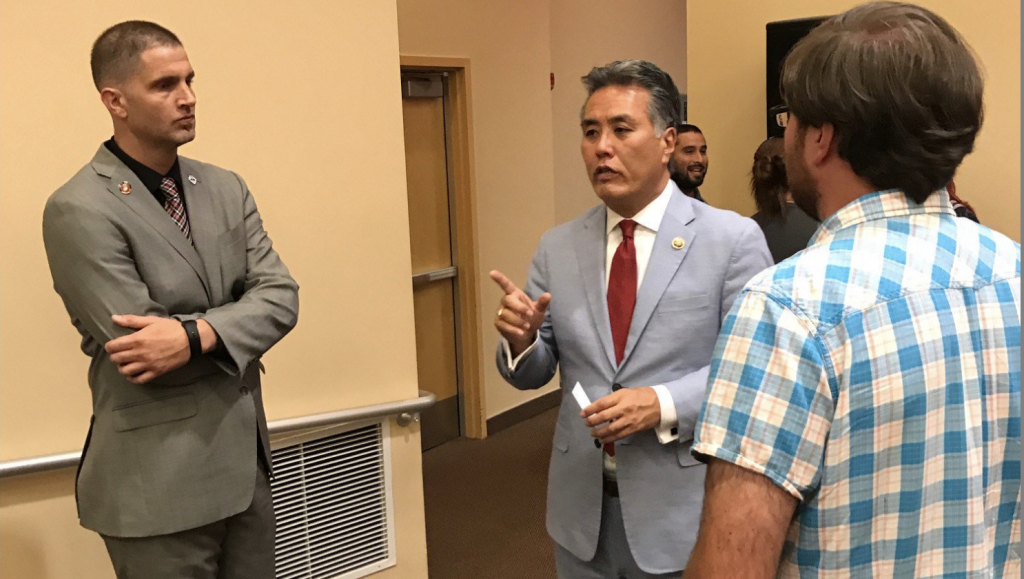