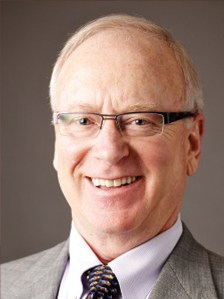 Since retiring as President, Carey has begun to work as a Higher Ed consultant and Executive Coach. He continues to lead a program for those “Aspiring to the College Presidency.”

Prior to serving at Edgewood College, Carey served for nine years as the President of Benedictine College, his alma mater. His success there included building enrollment through effective recruitment strategies and dramatic improvement of student retention. He revitalized the campus through strategic planning and a conservative budgeting philosophy.  Carey served as Vice President at St. Mary’s University in San Antonio, Texas and with St. Louis University in Missouri.

He earned his B.A. degree from Benedictine College with a major in English, and minors in Philosophy and Education.  He received an M.A. in Psychology, Counseling and Guidance and his Ph.D. in College Student Personnel Administration from the University of Northern Colorado.  As part of his postdoctoral studies, Dr. Carey attended Harvard University’s “Institute for Educational Management” in 1986.  He was awarded a Fulbright Grant to study and observe educational developments and international education in the Federal Republic of Germany in 1995.

His wife, Terri is an artist and has been a librarian and reading specialist. They have two sons, Christopher, a doctoral student at the University of Kansas and Matthew, a CFA and analyst with an investment firm.  Dan is proud of fourteen years as a youth coach in basketball, baseball and soccer.   The Carey family enjoys international travel and learning about other cultures.