Approximately 45 percent of America’s enlisted Armed Forces identify as a person of color. We urge Californians to support Proposition 16. It will ensure that veterans of color and their families have greater access to high-quality public educational opportunities, thereby ensuring a successful transition to civilian economic life. In 1996, California’s Proposition 209 created an unnecessary obstacle for California veterans of color pursuing a high-quality education by banning affirmative action in the admissions process in higher education. As this New York Times editorial points out, this produced, “a cascade effect in which the Black and Latino students who were rejected from elite schools then enrolled in less selective universities, crowding out others and precluding some students from attending college at all.”

California’s affirmative action ban was later mimicked by a number of states. Passing Proposition 16 may influence other states that have banned affirmative action to remove their bans, and will advance the higher education success for veterans, service members, and military families and to protect the integrity and promise of the GI Bill.

Isaac McMahan is the Director of Racial Justice at Veterans Education Success.

Read our Full Statement Below 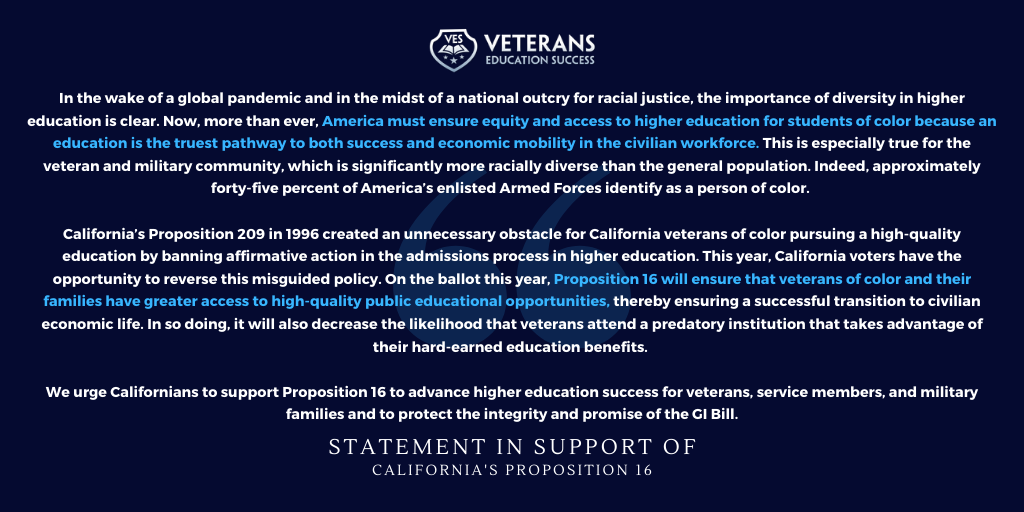