We Are Thrilled to Announce We Finally Got the 90/10 Loophole Closed!

It took a decade of our advocacy but we finally got it done!  The House of Representatives approved the loophole closure on March 10, 2021, following the Senate’s bipartisan agreement on March 6, 2021, to close the loophole while delaying its implementation.

Infographic: How the 90/10 Loophole Creates an Incentive to Target Veterans 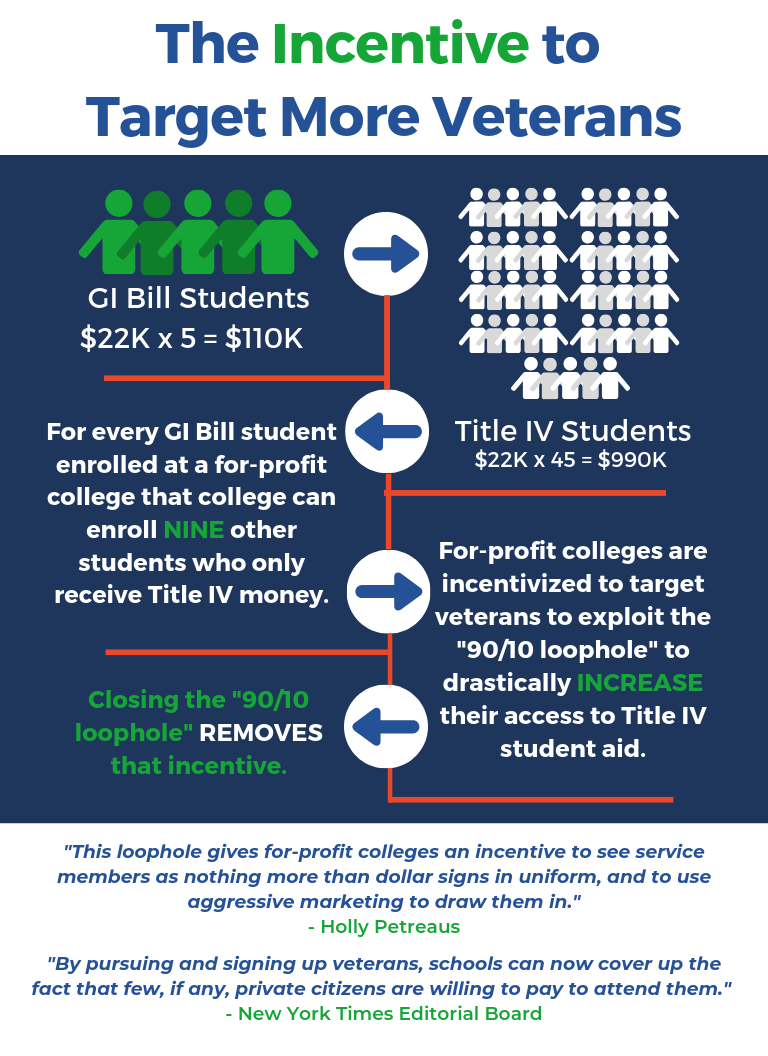 Why do for-profit colleges target service members and veterans with particularly aggressive and deceptive marketing and recruiting?

Because of a loophole in federal law that the for-profit colleges manipulate to use GI Bill dollars & Defense Department Tuition Assistance to offset a cap on federal student aid the schools otherwise face.  As Holly Petraeus, head of service member affairs at the US Consumer Financial Protection Bureau, has explained:

“Put simply, the rule says that a for-profit college must obtain at least 10 percent of its revenue from a source other than Title IV education funds, the primary source of federal student aid. Funds from Tuition Assistance and the G.I. Bill are not defined as Title IV funds, so they count toward the 10 percent requirement, just like private sources of financing.

Therein lies a problem. For every service member or veteran (or spouse or child, in the case of the post-9/11 G.I. Bill) enrolled at a for-profit college and paying with military education funds, that college can enroll nine others who are using nothing but Title IV money.

This gives for-profit colleges an incentive to see service members as nothing more than dollar signs in uniform, and to use aggressive marketing to draw them in and take out private loans, which students often need because the federal grants are insufficient to cover the full cost of tuition and related expenses.”

In this clip from the award-winning documentary film, “Fail State,” Zach Hastie, a U.S. Marine Corps veteran, describes how he was aggressively recruited by predatory colleges after he submitted his information into GIBill.com, an illegal website that was used by for-profit colleges to recruit veterans. Because of the 90-10 loophole, many for-profit colleges target veterans like Zach, using aggressive and deceptive tactics. Congress must close the loophole so veterans aren’t treated like ‘dollar signs in uniform.’

How the 90/10 Rule Loophole Harms Veterans

This video by Third Way peels back the layers on what is likely the most well-known loophole in higher education: the 90/10 rule loophole, which has created a dangerous incentive for predatory institutions to target student veterans for their military education benefits. Learn more here.

Congress enacted the 90/10 rule as a market-viability test:  To ensure federal funds are not used to prop up otherwise failing for-profit companies that are unable to attract private-paying students.

The U.S. Supreme Court upheld the rule’s precursor by explaining it is “a device intended by Congress to allow the free market mechanism to operate and weed out those institutions [which] could survive only by the heavy influx of Federal payments” and “a way of protecting [students] by allowing the free market mechanism to operate.”  The Court noted that, “[I]f an institution of higher learning cannot attract sufficient…. nonsubsidized students to its programs, it presents a great potential for abuse of our educational programs.”

So were GI Bill dollars & Defense Department Tuition Assistance classified as private dollars in the law?

No!  The GI Bill & Defense Department Tuition Assistance (TA) were never get classified as private dollars in the 90/10 statutory provision.  Instead, GI Bill & TA were simply not named in the statute because the statute referred to Education Dept. funds.  For-profit colleges figured out that GI Bill isn’t controlled by the Education Department, so they decided they technically didn’t need to count it as federal funds.  But nearly two dozen state Attorneys General wrote to Congress that this accounting gimmick is an abuse of this inadvertent loophole and amounts to a violation of the “intent of the statute,” if not the letter of the law.  Read the Attorneys General’s letter because it recounts some of the legislative history.

When the for-profit college association lobbyist tried to assert before the DOD Appropriations Committee hearing on DOD Voluntary Education Programs that DOD Tuition Assistance dollars are private dollars, Sen. Dick Durbin, the chairman of the Senate Defense Appropriations Subcommittee responded angrily, “If this Appropriations Committee is being asked to appropriate half a billion dollars of taxpayer money, then it sure is public dollars.”  Here’s a link to the committee hearing: http://www.appropriations.senate.gov/hearings-and-testimony/hearing-voluntary-military-education-programs.  Senator Durbin introduces a bill every Congress to close the 90/10 loophole.  Senator Carper also has a similar bill every Congress.

So why did the Congressional staff forget to include GI Bill and Tuition Assistance when the law was written?

Some legislative history:  The Senate Education Committee staff person who drafted the law explained the loophole to Bloomberg News:

“When the law was enacted, for-profits hadn’t yet moved into the military market, so the legislation’s sponsors weren’t focused on Defense Dept. tuition assistance,” says Sarah A. Flanagan, who helped draft the law as the Senate’s specialist in federal student aid. The law was intended to ensure that for-profit colleges offered an education good enough that some students were willing to pay for it, says Flanagan, now vice-president of the National Association of Independent Colleges and Universities, a Washington-based lobbying group. “Counting Defense Dept. funding for servicemen’s education as part of the money that’s supposed to come out of consumers’ pockets violates the purpose of the original legislation,’ Flanagan says.” Read more on Bloomberg.

What Does the Statute Actually Say?

The restrictions on revenue percentages at for-profit colleges were initially introduced in 1992 as the 85/15 rule and subsequently modified into the 90/10 rule in 1998.

Now the law has been fixed, to cover all federal funds. Specifically, the new statute adds: ‘‘Federal funds that are disbursed or delivered to or on behalf of a student to be used to attend such institution (referred to in this paragraph and subsection (d) as ‘Federal education assistance funds’)’’’ in Section 487(a)(24) of the Higher Education Act. The statutory change also replaced ‘‘Non-title IV’’ with ‘‘Non-Federal’’ and ‘‘funds for a program under this title’’ with ‘‘Federal education assistance funds’’ in  Section 487(d).

Our Press Release: After Decade-Long Fight, the Department of Education Has Closed The 90/10 Loophole

"The essence of the deal has to do with ineligible programs, such as corporate training programs," said Barmak Nassirian, a negotiator for student veterans. The department struck a deal with negotiators that would allow for-profit [...]

"We didn't know how to pay for college," said Alphi Coleman, an Army veteran who joined the military to help pay for college. "We didn't have counselors in our school to tell us how that [...]

STATEMENT REGARDING ONGOING DEPARTMENT OF EDUCATION NEGOTIATED RULEMAKING February 17, 2022 Hello, and thank you for the time to present here today. My name is Will Hubbard. I am a proud Marine Corps Veteran and [...]

Good afternoon. My name is Jenica King and I’m an Army veteran and the spouse of an active duty servicemember.  I used my GI Bill to attend Ashford University. One reason I went there is [...]

Good afternoon. My name is John Roberts, and I am an Army veteran. I was trained to fly helicopters, and when I retired, I wanted to earn my certification to fly airplanes. Liberty University was [...]